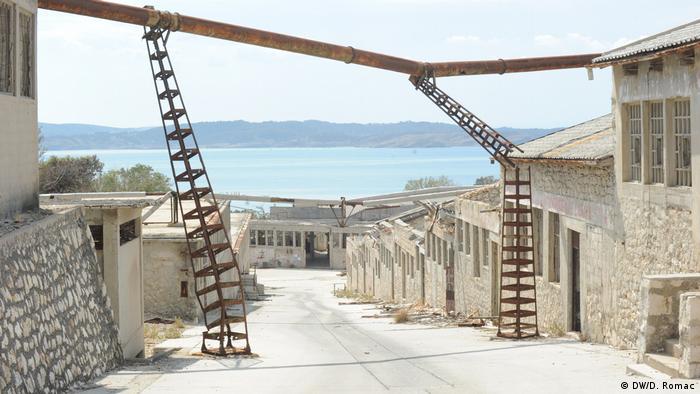 Goli otok  “Alcatraz on the Adriatic”

In the northwest of the Adriatic island of Rab, where the most beautiful sandy beaches are located, such as Paradise Beach, Lopar. The settlement is primarily known for St. Marin, the founder of San Marino, the oldest existing European republic (founded in 301). Namely, during the great persecution of Christians during the reign of the Roman emperor Diocletian, the stonemason Marin from Lopar from the island of Rab fled to Italy. There, on a hill above Rimini, he built a chapel, which became the core of the new city. He named the city San Marino and proclaimed it a republic. The state of San Marino is, as we know, the third smallest state in Europe (after the Vatican and Monaco). Regardless of St. Marin, Lopar is best known for an uninhabited island called Goli otok, which administratively belongs to him. Goli otok is located in the Velebit channel between the island of Rab and the mainland. Most of the island is made of bare rock with scarce grass, so, as barren, it was unsuitable for settlement and human life. It was mainly used by the inhabitants of Lopar to graze sheep on it.

The first people to inhabit Goli Otok were Russian prisoners of war from the First World War. Austro-Hungary chose him as a prison camp not only because of the uninhabited but primarily because of the impossibility of escape. It is a naturally isolated island without vegetation and drinking water, with strong winds and sea currents. The camp was disbanded after the war.

For the second time, a camp was set up on Goli Otok in 1949. It was founded by order of the CPY (Communist Party of Yugoslavia) for Yugoslav political prisoners after the conflict between Stalin and Tito in 1948 (during the Resolution of the Inform Bureau). Namely, the former Yugoslavia, headed by Josip Broz Tito, began to pursue an independent foreign and domestic policy, which did not suit the Russian master Stalin. When his attempt to bring Tito to Moscow, arrest him and place him in a gulag failed, he activated all those who were loyal to him with the aim of overthrowing the current Yugoslav government (č. Tito). It was evident that Stalin had loyal supporters in all strata of Yugoslav society, and even among members of the highest state and party leadership.

On the order of the CPY, the state authorities started a fierce confrontation with the opposition. According to the already seen scenario in the USSR during Stalin’s reign of terror, a large number of people prone to Russian executioners were arrested, and without trial, they were sentenced to prison by an administrative decision. Many innocent people were among them, but at that time it did not concern anyone. In the CPY, they called it a purge of their own ranks, and for their sending to the camp, they said that they were going there for re-education.

Of a number of smaller camps for the internment of Stalin’s supporters, Goli Otok was the largest and most notorious. More than 16,000 people were imprisoned there, mostly communists, of whom over 400 lost their lives. Among the detainees were women, over 900 of them, except that their gulag was on the neighbouring island of Sveti Grgur. The treatment that both men and women received was not only brutal but also morally degrading. The old camp inmates were forced to prepare a welcome for the new ones. They would line up in two columns, and a new convict had to cross the bloody path between them, who was to be beaten to death. If a detainee did not strike in his own way, he had to go the same way himself. Those who beat other detainees harder were promised to be released sooner. The guards called it killing man to man.

Agents were often thrown into the prison. Each would form its own group, so fights and showdowns of all kinds were common among the convicts, and more murders were reported. Hard physical work in the quarry and bauxite extraction, with regular harassment and beatings by the guards, was the daily routine of the detainees, regardless of the day of the week and the weather. Little by little, they would go for interrogations and additional portions of beatings in the building, which, due to its finely carved stone arches, looks more like the villa of a rich man than the camp administration. According to the name, one would expect Goli otok to be without vegetation, but along the west coast, we come across a pine park, really a bit neglected. This is due to the camp inmates, who were forced to dig pits in the stone, put earth and seedlings in them, and then stand in the sun for days and make shade so that the pines would be better received.

How to get to Goli otok?

There are many excursions that lead to Goli Otok from the nearby islands. Here are some of our recommendations:

Vojko Trip Around The Island

Boat Trips Around The Island-Mala Maris