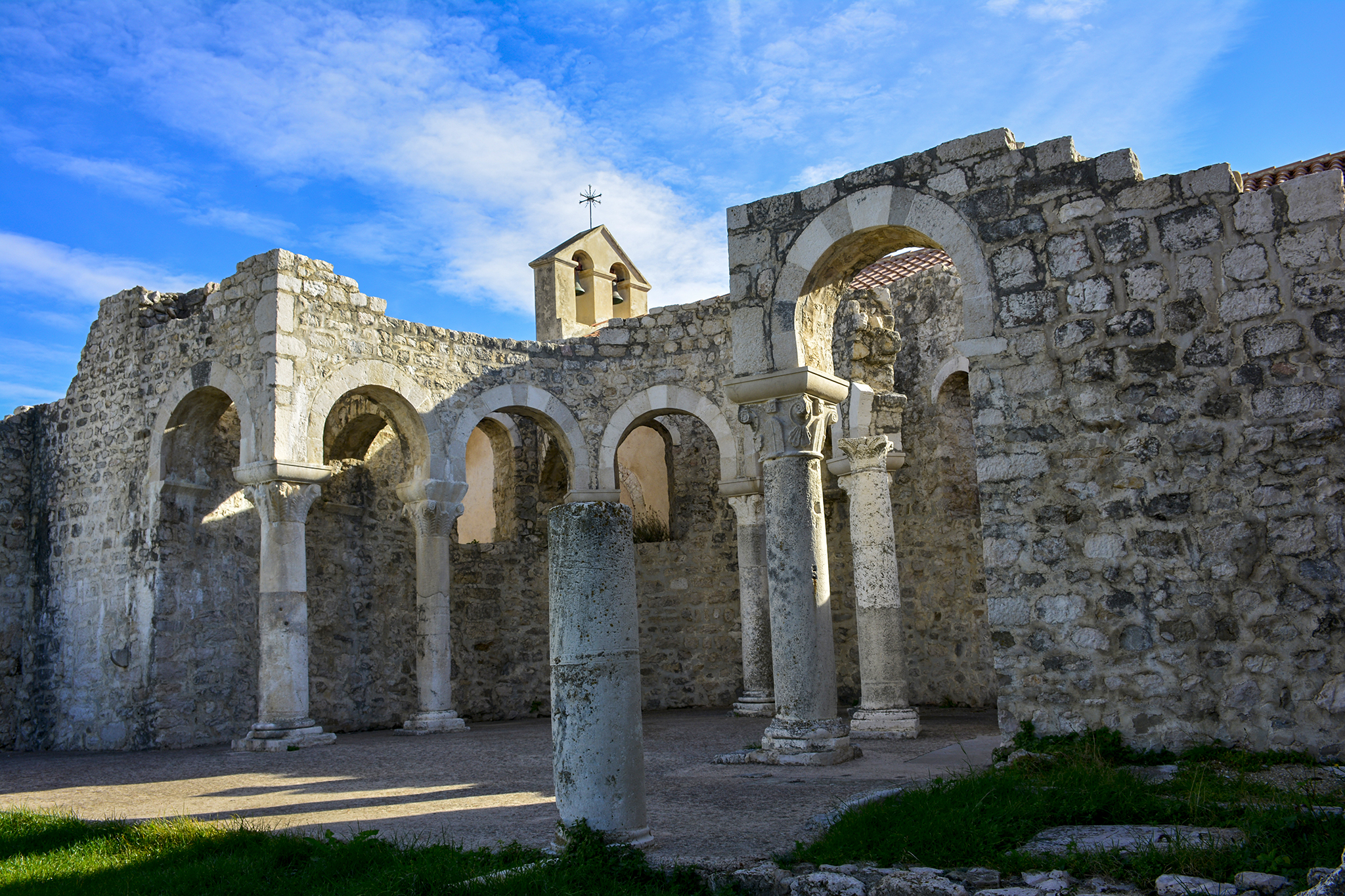 CHURCH OF SAINT JOHN THE EVANGELIST

Until the 13th century, there were Benedictine sisters in the monastery, and then the bishop handed over the church and monastery to the Franciscans, and in the following centuries one of the most important monasteries of this order in Dalmatia developed there.

Directly to the church of the Holy Cross are the walls behind which stretches the so-called Archaeological park, a spatial field of ruins that towers over only one secluded bell tower. Here was the most artistically and historically valuable basilica of Rab, the church of St. John the Evangelist and the monastery next to it.

There is no reliable data on the exact time of the origin of this basilica, but the 10th or 11th century is still taken as the time of construction of this extremely interesting church. Of all the Dalmatian medieval churches, only this one had a procession gallery located behind the main altar, between the outer wall of the church and seven columns arranged in a semicircle (deumbulatorium). Interestingly, only the early Christian city basilica in Salona had this same layout and the same number of columns.

There is a rich church equipment with works of art from various epochs – mosaics, plaits, two late Gothic chapels by master Alešije, precious altar carvings and paintings of the old Venetian school.

Until the 13th century, there were Benedictine sisters in the monastery, and then the bishop handed over the church and monastery to the Franciscans, and in the following centuries one of the most important monasteries of this order in Dalmatia developed there. In 1783, the Franciscans left the monastery and the buildings were converted into a bishop’s residence, as the old bishop’s palace near the bell tower of St. Mary had long since fallen into disrepair. In 1828, the diocese of Rab was abolished and these buildings were abandoned. Thus, they were handed over to grace and mercy and subjected to decay and ruin, and the town of Rab lost one of its magnificent artistic monuments forever.

The only thing that has been preserved – thanks to a thorough renovation in 1933 – is the bell tower of St. John as the last of the four bell towers at the top of the city. It bears a great resemblance to the bell tower of St. Andrew and dates from the same period (12th century). At the end of Gornja ulica, in one part of this park that lies high above the coast of St. Euphemia, there is a summer stage in front of the backdrop of a secluded bell tower, among high gray-white walls.

If we go towards the end, or down a wide staircase, we can see the huge ruins of the city fortifications. The road leads straight ahead through an alley that squeezes along small houses to the ruined church of St. Christopher in the fortress of the same name. Here it turns left onto the walls that leave a free passage to the city park.

In this extreme part of the city rise the remains of mighty fortifications, the defensive tower of St. Christopher and Galliard (Torre dei gagliardi = Tower of the Brave). They were built in the 15th century by the Venetians to protect the mainland side of the city. Through one entrance on the inside of the fortification it is possible
climb to the crown of the walls, which rise at the highest point of the metropolitan area.